My second full week on Botswana brought with it a feeling of finally setting in to a routine and into my surroundings. I spent most days away from my host family for training, but made a conscious effort to spend my evenings with them, cooking, cleaning, watching SABC or BTV and looking after my 6 month old host-niece.
A major part of this routine were language lessons with my LCF Lesego and Mpho (Mignon), Thato (Nathan), and Sethunya (Molly). Lessons are held a ten minute walk from my host family’s home, in a small room on Sethunya’s host family compound. Our days were spent learning the importance of greetings in Botswana, how to introduce ourselves, basic transportation and grammar points. We also had the pleasure of celebrating our LCF’s birthday.
Lesego had been working as and LCF for Peace Corps Botswana for several years now, and one day before our lessons began she happened to mention that it was her 34th birthday. Well, she didn’t mention the 34 part, we rather sheepishly pried that part out of her. We have daily hour long lunch breaks where she returns to the main Education Center for lunch. Mpho and I took this opportunity to take (let me point out our very first) taxi to the local supermarket to buy her a cake while Sethunya and Thato stayed behind to make her a card. It was a lot of fun and a great bonding experience for our group…despite Sethunya’s 12 year old host brother spoiling the surprise and telling Lesego the moment she was dropped off of our plan (apparently surprise parties aren’t a known concept in Botswana).
The week itself was full of training, language, setting up our bank accounts in Gaborone, yoga, and getting into the routine. My time here began to become more routine.

I thought I would use this opportunity to talk a little bit more about HIV/ AIDS in Botswana and Peace Corps history here. I’ll first begin with some basics. When looking at HIV/AIDS statistics it is first important to understand a few definitions.
First, my disclaimer: I am no expert; I’m just sharing with you what I’ve learned through my training and experiences here.

So now to talk about how this all relates to Botswana and my two years here: The overall HIV prevalence rate in Botswana is 25% (15-64 age group), for males 31-49 years old it is 34.5%, and females 31-49 it is highest at 40.9%. The overall incidence rate in Botswana has dropped drastically over the years but is still at 2.9% per year, which translates to approximately 20,000 new cases per year. In 2009 there were 350,000 PLWHIV in Botswana, where the general population is only 2 million to begin with. There are approximately 10-15,000 AIDS deaths per year. Thus it is easy to see how this epidemic has affected virtually every individual, and is a huge drain on the country’s resources and human capital.
There are many drivers of the epidemic in Botswana, but it is important to understand them in order to understand why the epidemic has grown so severe in Botswana compared to even neighboring countries (Botswana has the second highest prevalence rate of HIV in the world, second only to its small neighbor Swaziland). Multiple-Concurrent Partnerships MCP’s, low male circumcision rates, high prevalence of STI’s, a high rate of alcohol abuse and gender inequality are all major contributing factors.
I’ll begin with MCPs. If you’ve read the book “The Invisible Cure” by Helen Epstein then this issue of MCP will be very familiar to you (and if you haven’t and have any interest in the HIV/AIDS epidemic I strongly encourage you to read it). In Botswana MCP is a very common practice, a common proverb in Setswana being “Manna poo ya a agelwe mosako” –please excuse my spelling, but it translates to “A man cannot be contained in a kraal”. And 1/4 of females and 1/3 of males self-report to be in a MCP. This is a very dangerous partnership style when deal with HIV because it essentially forms a ‘super-highway’ for the virus, as the viral load of HIV is highest in a newly infected person, and they are thus more likely to pass the virus on and in long term partnerships (as most MCP relationships are) they are less likely to use any form of protection.
The second major contributing factor is low male circumcision rate. Less than 15% of males in Botswana are circumcised, and global statistics show that the HIV prevalence rate is as much as 8 times higher in uncircumcised men as men are 60-75% less likely to get HIV if they are circumcised. Men also are already at a lower risk than women
Thirdly we look at the STI prevalence in Botswana and how this affects HIV. If a person has and STI that causes blisters or ulcers they are 1-8 times more likely to get HIV because it serves as a portal of entry making it easier for the virus to enter the body.
Next it is important to look at the high rates of alcohol abuse in Botswana. According to a 2006 survey 31% and 17% of women fall into the category of ‘heavy drinking’ which is defined as more than 21 drinks a week for men and 14 for women. Studies also obviously show that alcohol increases the likelihood one would engage in risky behavior 3-4 times. Alcohol however also creates many other societal problems including dangerous road conditions as the legal driving limit is approximately 3 times higher in Botswana than the United States (from what I’ve been told…don’t quote me on that) but needless to say, alcohol abuse is a major issue here.
Finally is the issue of gender inequality, this is a major overarching issue that extends into the problems of intergenerational and transactional sex. In Botswana 28% of women admit to having sex with men 10+ years older than them, and in many communities transactional sex is exchanged for commodities such as cell phone airtime. These issues not only affect the spread of HIV but also have greater negative implications.
I think that is enough of the negative for today, in my post next week I will talk about a few of my cultural experiences, including attending my first wedding and funeral in Botswana!
Best wishes,
Neo Koloi 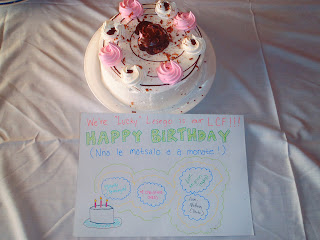 Lesego's Birthday cake and card!
Posted by Christina Zielke at 6:27 AM

The contents of this blog are original thoughts and opinions.
This blog is unofficial and not-for-profit. All views expressed are those of the author and do not reflect the opinions, policies, or position of any institution or individual(s) mentioned herein, including the United States government, the Peace Corps, the government of Botswana, or its citizens.

Christina Zielke
I am a 2011 alumnus of Miami University in Oxford Ohio. I studied in Troisdorf Germany in 2005-2006 and at Liaoning Normal University (辽宁师范大学） in Dalian, China 2010-2011. I am currently serving in the US Peace Corps as an NGO Capacity Builder in Botswana April 2012-June 2014.